As the leading retailer of Breitling in St. Louis, we, Clarkson Jewelers, have an extensive selection of these fine time pieces. Purchasing a Breitling for yourself or a loved one gives you a precision-crafted miniaturized machine, engineered to withstand extreme conditions. It also ties you into a history that spans over 100 years.

In 1884, Leon Breitling opened a workshop in Switzerland’s Jura region with the goal of making timers and chronographs (stopwatches). From the opening of his company, his goal was to serve users in science and in competitive sports, and his chronographs quickly became the world’s standard. Given that the turn of the century also saw the popularization and invention of both automobiles and motorized aviation, Breitling timers rapidly found themselves being used in cars, planes and at sporting events.

Not one to rest on his laurels, Leon started innovating. The world’s first wrist chronograph hit the market in 1915. By 1923, he had figured out a way to separate the stop/start button from the reset button, creating the first lap timing feature, and in 1934 he created a mechanism with an additional reset button. In 1969, Breitling released the world’s first self-winding chronograph. That technology made its way into Breitling’s most widely selected model — the Chronomat — in 1984.

Given our long history with the aviation industry, a Breitling in St. Louis is a natural choice. From the birth of aviation, pilots were likely to have a Breitling chronograph in their pockets or, later, on their wrists. However, in the 1930s, Breitling started to offer timers as cockpit instruments. Britain’s Royal Air Force won World War II in part because of the accuracy of its Breitling timers. In the post year era, the Navitimer won over aviators from its launch in 1952. It even found its way into space in 1962 on astronaut Scott Carpenter’s wrist on the Aurora 7 flight.

Today, Breitling continues its close ties to aviation. The Breitling Jet team can be found overhead at the Reno Air Races and in the Red Bull Air Race. When Yves Rossy straps on his winged jet-powered backpack, he has a Breitling on his wrist, as well.

Clarkson Jewelers — Your Choice for Breitling in St. Louis

We at Clarkson Jewelers are the only authorized dealer for Breitling in St. Louis. At our location, you can see the entire Breitling collection. All are truly instruments for professionals and all are certified chronometers. The Chronomat is the classic Breitling, while the Navitimer is the industry standard timepiece for aviators. If you lead an active life, the Breitling Emergency has a rescue beacon that can help you to be found anywhere — even in Antarctica. Finally, if you love motorsport as much as timepieces, the exclusive Breitling for Bentley collection might be the right choice for you.

Our staff is dedicated to giving you a one-of-a-kind experience as you select your new timepiece. We invite you to experience Breitling in St. Louis and to see how these professional instruments can complement your lifestyle, whether you pilot an aerobatic jet in air races or drive a sedan on your daily commute. 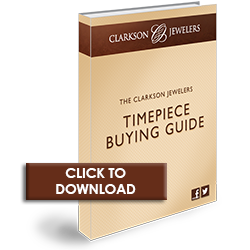 Want to join the discussion?
Feel free to contribute!

3 Tips for Better Timepiece MaintenanceQuick Guide to Bridal Jewelry In St. Louis
Scroll to top
Manage Cookie Consent
To provide the best experiences, we use technologies like cookies to store and/or access device information. Consenting to these technologies will allow us to process data such as browsing behavior or unique IDs on this site. Not consenting or withdrawing consent, may adversely affect certain features and functions.
Manage options Manage services Manage vendors Read more about these purposes
View preferences
{title} {title} {title}